Every year, 10 (or so) Special Benanas are awarded to the best and worst things. There is no logic or rationale to the categories…just whatever I happen to think of. So without further ado, this year’s Special Benana winners are:

Golden Benana for Best Oedipuss:
Maddie, of course! Who else could it be?
(runner-up: N/A)

Golden Benana for Most Inspiring Thing:
r/place (weirdly)
(runner-up: Come From Away – not at all weirdly)

Golden Benana for Thing That I Hate-Watched/Hate-Listened To So Many Times That It Eventually Occurred To Me That Really I Love It:
That Kendall Jenner Pepsi Ad
(runner-up: Thunder, by Imagine Dragons) 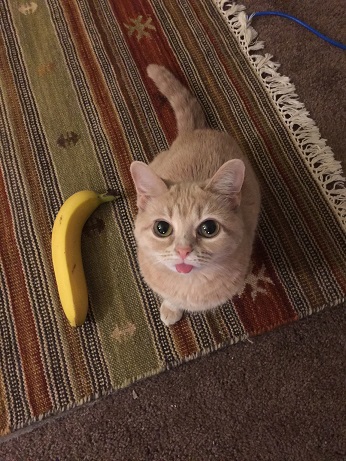 Golden Benana for Totally Unearned but Totally Wonderful Place in My Heart:
Bad Mom’s Christmas (the first movie I saw in theatre with my daughter and which is terrible and which I now totally love)

Golden Benana for Being Amazing and Inspiring and Really Worth a Whole Awards Show of Her Own:
My wife

Rotten Benana for Most Awkward Moment of the Year
Remember the Oscars snafu? That actually happened…

Rotten Benana for Worst Bacteria of the Year:
That little bugger that gave me strep throat.

Rotten Benana for Overall Worst Thing of the Year:
Pretty much everything involving Mt. Sinai
(runner-up: the realization that the terrible-ness of Mt. Sinai is, professionally, kinda sorta somewhat my fault)