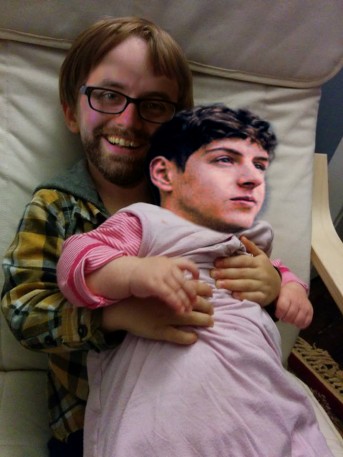 After winning, Bwana was forced to slide into his pjs and be Graham’s little spoon in what can only be described as the 3rd creepiest Grahammy tradition

Based on a reimagining of the Akira soundtrack. Very silly and very serious techno all at once. I had more fun with this than anything else. TETSUO!

An old release, but I only heard about him this year. It’s a bootleg allegedly made of stolen tapes from an in progress album. Then he never released the album. Did he even make this? Who cares? It’s freakin’ awesome. Jasmine is the standout single.

Bronze Grahammy – Vince Staples and GTA, “Little bit of this”

Technically this is a GTA song, but it’s great because of Vince Staples. Everything he touches is great. He also made a banger with Clams Casino this year, but this one is better.

In colour is a repeat from last year. I still like it more than most other albums. Then The xx released “On hold” which is also amazing. At the risk of jinxing it, I see you will be album of the year next year. Also, I like their goofy dancing.

5th Place – A Tribe Called Quest, We got it from here… Thank you 4 your service

[Grahammy Note: there is no comments section]

[Ed Note: actually there is]

I like Mura Masa but Four Tet really elevates this song. A$AP Rocky continues to be a terrible rapper.

This album is named for a Joy Division song. Check. They’re using the best song on the album “Ain’t it funny” to hawk a new Dragon Ball-Z show. Check.

You decide because I couldn’t. To help: The Caribou album is two years old and Schoolboy Q uses lots of bad words.